Before the Silk Road

In a remote Chinese desert, scientists have unearthed Caucasian mummies that are thousands of years old. Where did they come from?

This program definitely appealed to my love of history. What was really interesting about this was the fact that a previously unnoticed group of people settled in the Tarim Basin of China, along the far western edge, around 3000 years ago. It had always been assumed that East and West had little to no contact with one another this long ago…but the mummies prove otherwise.

If you don’t want to watch the show, this Wikipedia article about the Tarim mummies pretty much sums it up.

Books I Must Read!

I’ve sorely neglected my passion for reading during November. I’ve been on the hunt now for good books to read, and I’ve found a few that I’d like to actually own 🙂

The first book is more of a manga, called Shirahime-Syo: Snow Goddess Tales. There are three stories, plus the prologue and epilogue, all surrounding mystical tales of the snow and the snow goddess.  Can it be any wonder why I want this book? 😛

(Also, if you’ve seen my mock book trailer, you’ll recognize the image of the girl on the cover)

Another book that I’d like to read is more of a collection of short stories, called A Robe of Feathers  by Teresa Matsuura (whose blog you can visit here). Victoria Dixon first led me on to this one.  The short stories revolve around the blurring line of superstition and reality in Japan. I think it’ll be good for me to read to see how I can encompass that cross in my own novel.

I’ve tried to find it in the library, but none of them have it–including the ones that are through interlibrary loan throughout the state.  I’d like to get this one though for my personal collection as it has that dark fantasy/mystical feel to it–at least by the descriptions I’ve read.

Finally, I’d like to read the old classic of Pearl Buck’s called The Good Earth. It’s been one I’ve been meaning to read for awhile now, yet somehow it kept being pushed to the back of my mind. This one is set in China and follows the life of a farmer through the reign of the last emperor (early 20th century).

For one like me who claims to love Asian stories, I can’t believe it’s taken me this long to finally put this on my immediate to-be-read list.

I have lots more on the list but these are definitely the top three–at least as of the time of this blog post.

Also, my 200th post is coming up soon. Perhaps I will have a little giveaway in celebration 🙂

I’ve recently found that I’m becoming more and more fascinated by mythology. I think part of it has to do with what I’ve recently read (Silver Phoenix and Wings), and I’m one of those people that will obsessively research and read up on something of interest. Inevitably this leads to me coming up with a plethora of story ideas too 🙂

I find it very interesting how different parts of the world have their own myths, but what’s more intriguing  is how similar some of the myths are, especially in opposite corners of the world. For example, the common myth of fairies is present in many cultures, from Europe to Asia. It makes one wonder what sort of common phenomenon people attribute the existence of fairies to whether that’s ghosts or demons or something completely unknown to us. There’s just so much of our world that I believe we’ll never know or understand.

Anyway, since I have such an interest in Far Eastern cultures, I ended up finding a huge Wiki article on the legendary creatures of Japan. Some of the little creatures are quite comical, while others are beyond terrifying.

Some of the ones I’ve found particularly interesting:

Akaname – the spirit who licks the bathroom. It looks like a frog type critter. I don’t know about you, but as creepy as this sounds, I wouldn’t mind a critter cleaning my bathroom 😛

Bakezōri – a sandal spirit (specifically the zori sandals that are similar to flip flops). The Wiki article has a picture of a stature of it and it looks very similar to the cartoon character of Plankton from SpongeBob.

Gashadokuro – a giant skeleton, the spirit of the unburied dead. One word for this: FREAKY. It’s what nightmares are made of.

Hone-onna – a skeleton woman. She’s more of what is called an “energy vampire” or a succubus. She preys on men and drains their life from them in order to live. I’ll leave it up to your imagination on how exactly she does that.

Yuki-onna – the snow woman. One of the most intriguing in my opinion. She’s often seen in a snow storm and there are varying stories about her, from leading lost travellers astray and killing them with her icy breath to entering a mountain family’s household and killing them as they sleep (most of the time she has to be invited in, according to legends). But other legends depict her as a bit more human, although conflicted.

Anyway, I’m thinking that after my current book is done, I’ll be working on something concerned with mythology. I’ve already got a few short story ideas for some of these legendary spirits.

For those of you who like YA fantasy, Cindy Pon’s debut novel Silver Phoenix comes out tomorrow! 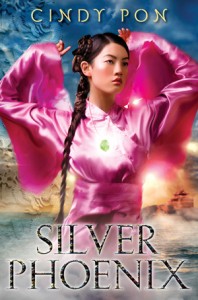 I’m not normally a huge fantasy fan, but this one definitely got my attention! It sounds like a thrilling read and you better believe I will be heading to B&N after work tomorrow to see if it’s come in yet 🙂

Of course, another reason I’m drawn to the story is because of the culture. Even though it’s fantasy, it’s based on ancient China. I have a passion for Asian cultures, whether it’s Chinese, Japanese, Korean…

Perhaps it’s just my passion for world cultures in general 😛 I’m always looking for books that are set in a period and culture distant from my American/European setting and heritage  (although I’m in love with those too!). I suppose it’s pretty much anything with a historical flavor and recently, those with a little fantasy in them too.
But I’m super excited about ones like Silver Phoenix, since my own novel is set in in the Far East. There aren’t many out there like this one and it’s thrilling to see more Asian themed books on the market. It gives me hope that there may be a market for mine, should it ever reach publishable quality.
Anyway, head on over to Cindy’s site and watch her book trailer (I linked it up in the beginning of the post). I keep watching it over and over again!
Thanks to Jeannie who alerted me to the early release of the novel. Here’s hoping that we’ll be seeing her own novel soon (another that I’d definitely be purchasing).