Life is Made of Awesome

September’s here, the weather’s getting cooler and my favorite season is rapidly approaching: Awesome.

Got my Avon order in today and it’s like Christmas everytime a package comes, especially when there’s fun nail polish colors.  🙂

Vacation to Disney World is rapidly approaching, anxious to have a break from work and just relax. Also, really looking forward to acting like a kid again and forgetting adult responsibilities for a week. How great is that?

New shows are coming on TV soon. I don’t watch much but it’s nice to have something to look forward to on certain evenings, instead of trying to fill my time watching old episodes of King of the Hill (which is still epically funny, no matter how many times I watch it).

“The Most Magical Place on Earth…” Part I

The past six days were probably the most exhausting I’ve experienced in quite awhile. I honestly don’t think I’ve walked so much in such a short amount of time in my entire life! Legs and feet are still sore from it.

Still it was amazing. Magic Kingdom was definitely my favorite of all the parks but Epcot’s a close second (especially the World Pavilion! Ah, that will be the closest to being a world traveler I’ll ever hope to get any time soon).

Being Florida, it was about 95 every day we were there. There was a chance of rain every day but aside from a few sprinkles, it remained humid and hot. Not my favorite weather ever, but it was expected!

I have to say my favorite ride out of everything was Splash Mountain:

And I screamed like a baby going down that hill. Every. Single. Time. (We rode this ride probably close to a dozen times while we were there).

Another fun one was of course, Big Thunder Mountain Railroad.

Other favorites were Pirates of the Caribbean (which has Jack Sparrow in it now), and the Buzz Lightyear ride in Tomorrowland, where you are actually shooting targets with your laser gun on the little spaceship. 🙂 The first time we rode it, Phil maxed out his score…neither of us has any clue how he did that, but we think he got one of the “secret” targets or something. He scored pretty high the other four times we rode it but never quite hit the 999,999 mark again.

Oh and one of the best parts of Disney–I got to  meet my two favorite princesses, Aurora and Belle. Aurora has been my favorite since before I can remember, when I would watch the movie every day and “act” it out. She was the best–and she really loved that my “prince” shares the same name as hers. I literally felt like I was six years old again!

I was probably the oldest girl in line but who cares? I’d do it again in a heartbeat 😛 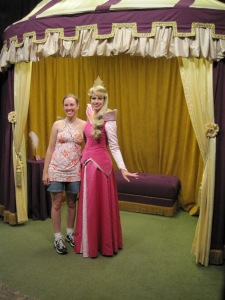 I got to meet Princess Aurora!

We also got to eat in Cinderella’s Castle, although the experience wasn’t the best because of the waiter we got 😦 Oh well, that’s life right?

Oh and I can’t forget the best parade–SpectroMagic! It was so awesome! 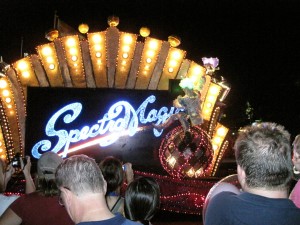 I’ll post sometime this weekend on the rest of the parks–I don’t want this entry to get too long!

Disney World lived up to everything I thought it would be, plus more 😛 Alas, I am too tired to elaborate right now, having been up since the crack of dawn, making one last trip to Magic Kingdom for our favorite rides, flying home and unpacking.

For now, I will leave you with this lovely picture that my hubby took the first day we were there–he also got one of the shows playing in the background (if you look closely you can see Cap’n Hook and Peter Pan :P) 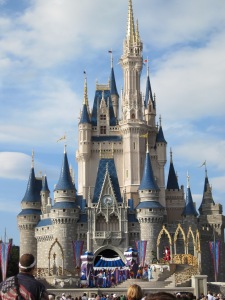 This time tomorrow morning I should be landing in Disney World. And hopefully not suffering too much from motion sickness because of the flight 😛

I’ve never been to Disney and I know I’m probably going to act like I’m five years old again. I’ve already made it a goal to get pictures with my favorite Disney princesses (Aurora and Belle).

With each passing hour I feel like I’m growing younger! 🙂 I’m not going to be able to sleep tonight, especially since I have to go to bed before 11 and get up before dawn. Oh well; I’ll be running on adrenaline!

Anyway, I’ll be back next Thursday night and I’ll try to post pictures Friday. Have a great week everyone!

This time next week I should be in Disney World, assuming there aren’t any flight delays.

Until then, there’s lots of stuff I have to get done. Chores around the house, packing…and hopefully a little novel research thrown in there somewhere. Part of me is thinking about taking a book with me on the plane for research but I’m doubting I’ll get much of anything done. Plane rides usually make me a little nauseated, especially when it descends and we’re landing.

Today is chore day–there’s laundry that needs folded (I always put that off…) dishes that need washed and a quick straightening up the clutter. If I try and keep things as neat as possible until we leave, then that limits the amount of chores I have to do during the week!

It’s a beautiful day out too–mid 70s, not a cloud in the sky. I think I may have to take the Potato (yes…that’s his name :P) to the the dog park today and let him romp around with the other canines. And I’ll get about a dozen people asking me what breed he is, to which my answer will be “A mutt.” And then they ask what I think he’s mixed with…which could be anything from chow (because of the purple tongue and once-thick fur) to Corgi to Chinese Crested. The last one is new–but since he went to the groomers yesterday, he looks like one in some ways. The groomers also think he has some in him because of the bare spots he had.

Here are “before and after” pictures of him: 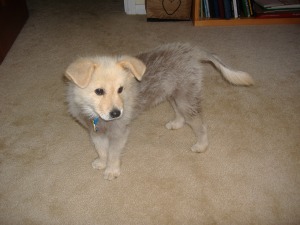 Before...with his "mane" and tangled coat 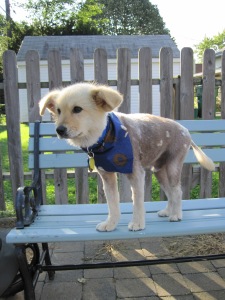 Curious: what do you think he’s mixed with? Your guess is as good as mine! I don’t think I’ll ever know for sure. So now I call him a “chow/corgi/shepard/chinese crested mix! 😛