The Newest Member of the Family

So, we got ourselves a new kitten. He joins another cat, Sata, and a dog, Potato.

His name is Toby. 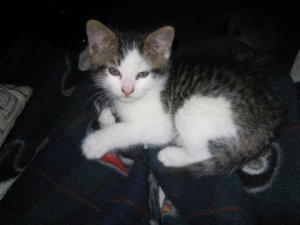 One of the real estate agents I work with found kittens a week ago in a barn behind her house. She’s been taking care of them and needed to find homes. I sent an email to Phil, telling him to forward it at work, and we both expressed interest in getting one, so that’s what happened 🙂 The little one had a brother, and they were nicknamed Batman and Robin (Batman had a little mask too–he was black and white). If we hadn’t had another cat already, we would’ve taken him too. I was a little sad that we had to part them, but the agent said there was already some interest in him and Phil had a co-worker that expressed interest too, so he’ll certainly find a good home.

Now comes the challenge of getting all of my animals on friendly terms with each other 😛 Sata, our 2.5 year old cat, just watches him from afar, occassionally going up to the crate to sniff him while he’s sleeping. If he comes near though, she hisses and the tiny thing scampers off.  Then Potato, our pup, desperately wants to play with him, but he doesn’t realize that it’s not a puppy–and that he’s also about 15 times his size, so little Toby generally hisses at him when he comes close. However I did get Toby to sniff Potato this morning, but I had to restrain poor Potato–he wanted to sniff him so badly, he was shaking.

It’ll take time…probably months and months, but I’m glad we have him.

We Got a Puppy!

We welcome today a new member of our family: a ten-week-old chow/shepherd mix puppy named Tato (short for what my husband calls him–Potato. I like Tato better :))

The best part of it is our 1 year old cat Sata seems to love him. She follows him everywhere and is always trying to get him to play. I’m very relieved for that.

We got him from the humane society; they were having a “Home for the Holidays” event at the mall and that’s where he was. He’s had a rough life; he was abandoned in a crate along with another dog when he was much smaller. But he simply loves to be held and loves people and other animals. He’s very laid back too–not wild at all!

It makes me laugh because Phil wanted a small dog–no bigger than 30 pounds–and he’s probably going to be easily between 40-60.

Now comes the fun weeks of house breaking him–he’s piddled a bit on the floor here and there and had one other accident, but that’s to be expected.